Recently, I did a Broadcast on Kidney Stories 2 with is Charles  “Chuck” Pecoraro.  He is a 63 year old man from Florida who is seeking a Kidney. 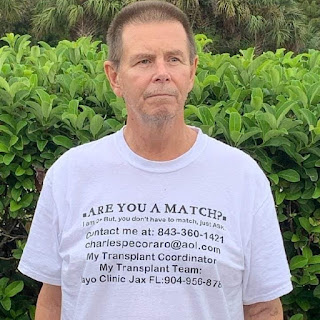 Chuck’s Background
He was born into a military family,  but became a business manager from the age of 19 in 1979 until June of 2019 when he became ill. He is married and has 2 children. He has also been an independent transportation driver in Myrtle Beach SC, where he created his own company, “Cabbz Here Taxi” that  became a company with 40+ vehicles and drivers.

Cancer Diagnosis
In June of 2019, he was diagnosed with Malignant Melanoma Cancer and had to undergo several surgeries in order to isolate and remove the cancer. In the process of recovery,  he found himself unable to think, confused and agitated with difficulty communicating.

After his wife scratched his back,  he saw a Dermatologist, Dr Epperson,  who did a screening and determined it was Cancer. Due to HBP, he was referred to a primary care physician.  In November of 2019, Dr Hess conducted a physical examination, determining the the bp was still high. Despite medication the bp remained high,  so in February 2020 additional tests were ordered.

On Valentine’s Day,  while out to dinner with his wife, Tina, Chuck received a phone call from Dr Hess. The doctor requested he hand the phone to Tina. He told Tina to take Chuck to the nearest hospital to be checked in.

Kidney Issues
At Waccamaw Community Hospital several tests and a kidney biopsy was performed. His condition continued to deteriorate to the point where he had to sell his business and move in with his mother-in-law.  Once in Florida,  he saw a Nephrologist,  who had some blood tests performed. This led to an admission into Mease Countryside hospital where a heart catheter was installed and Chuck was placed on dialysis. The diagnosis was Amyloidsis.  A fistula was later placed in his left arm.  Charles has had many complications since his kidneys failed. Charles has been on dialysis the last 2 years.  He also has suffered from brain fog.  Brain Fog and Kidney Disease Article 1
Brain Fog and Kidney Disease Article 2

Chuck is Currently Seeking A Kidney Donor.  Chuck is currently seeking a Kidney Transplant. Should you wish to donate your kidney to him please refer to Charles Richard Pecoraro, my Transplantation Coordinator in Nurse Stephanie at 904-956-8782(Mayo Clinic, Jacksonville, FL) You might not be an exact match for him but through the “Paired Match” program he could still get a kidney from the National Database and yours would save another person.

If you are healthy and between 18-65 years old please start the process by completing the on line health questionnaire to see if you qualify for the program.  Check Here

Conclusion
Charles Pecoraro has shown great patience in overcoming some very difficult obstacles.  Please share this blog to help him find his match.