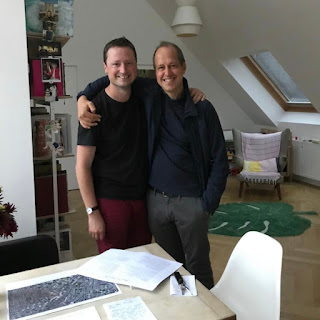 I recently did a Streamyard Broadcast with Ben Street, a living kidney donor from London and Jasper Sharp,  his grateful kidney recipient from Vienna.

Ben is an art historian and writer. He has worked as an art history lecturer and educator at a wide variety of institutions, including the Museum of Modern Art and the Solomon R. Guggenheim Museum, New York, and Tate and The National Gallery, London. He is author of a number of books on art, for both children and adult audiences. His most recent book is “How To Enjoy Art: A Guide for Everyone.”

Jasper is a British art historian and curator. From 1999–2005, Sharp worked at the Peggy Guggenheim Collection, Venice, and has lived in Vienna since 2006. He is Curator for Modern and Contemporary Art at the Kunsthistorisches Museum, for whom he is currently preparing exhibition projects with artists including Ed Ruscha, Lucian Freud, Richard Wright and Joseph Cornell.

Jasper Sharp is an advisor to the Outset Contemporary Art Fund, curator of the talks program at Frieze Masters, London, and a member of the advisory board of the Sammlung Lenikus which provides studio residencies in Vienna for Austrian and international artists.

Ben and Jasper met New Years Day, 2002 in Venice, Italy, where Jasper was working & Ben was doing an internship at the Peggy Guggenheim Museum. They became roommates and friends. They have been great friends and collaborators ever since.

The Beginning of Jasper’s Kidney Problems
In 2013, Jasper first received notice that his kidney were failing and at sometime in the near future,  he would need a kidney transplant. The goal at that time was to try for a preemptive kidney transplant and to avoid dialysis.  His doctor estimated that it would be 1-7 years before he would need a transplant. She recommended a living donor.  Jasper’s family was ruled out as his condition, Glomerulonephritis was hereditary and may have been present on both sides of his family.  Friends became the next group to consider as potential donors.

Rallying Friends As Possible Donors For Jasper
In 2015, Ben received a phone call in London from Alex Trewby, an old friend of Jasper’s. Alex tells Ben that Jasper is very ill and needs people to test for him to see if they could donate a kidney to Jasper. Jasper will need a kidney transplant sometime in the future. Would you consider being a donor for Jasper. Ben readily agreed to consider it.

And Then There Was One, Ben!
There was a group of people that Alex had phone and gradually one by one dropped off or were disqualified as donors. All except Ben. He became the only potential living donor left. From 2015 until 2021, Ben was steadfast in his determination to help Jasper. Jasper’s blood type is a B+

Ben Was Persistent and Committed To Donating To Jasper
Between 2015 and the Summer of 2021, Ben would have to come from London to Vienna, a distance of approximately 767 miles by air, a 2hr plus flight for tests, scans, bp  monitoring and x-rays. Ben had to make this journey 6-8xs,  at least once a year to update his medical condition.

Delay to Transplant #1 Due to COVID-19
Around 2019, it became clear that the transplant team wanted to go forward with the kidney transplant,  but about this time the COVID-19 virus became prominent,  causing delays in kidney transplants worldwide. Jasper’s doctors were aiming for April 2020, but the operation was pushed to the middle of August 2020.

The transplant group wanted Ben to update his cross-match study, as well as multiple other tests,   to make sure his kidney was still compatible for Jasper.  The virus restrictions made travel difficult. After Ben’s arrival,  all test were updated and then the men awaited the results.

Delay # 2 Jasper’s Intestines Rupture
About 48 hours before Jasper’s kidney transplant was to take place,  his intestines rupture in the middle of the night causing a postponement of his transplant surgery.  This did result in emergency surgery. This resulted in a 3 month delay.

Delay #3 Jasper’s Surgery
In December of 2020, Jasper needed a 2d operation on his intestines where they removed a section due to repeated infections.  This resulted in another delay.

Delay # 4 Jasper Starts Dialysis
In February of 2021, Jasper had to go on dialysis.  Jasper did 4 months of dialysis,  3 evenings a week. 3 evenings a week,  In Center, with a catheter. Despite the delays, Ben remained determined to donate.

Delay #5 First Transplant Attempt Doesn’t Go Forward
The transplant date was reset for June 4th,  2021.  Ben and Jasper shared a room in the hospital and were prepared to do the transplant that day. Hospital Medical University of Vienna. Ben was taken to the operating room,  but returned 45 minutes later.  Ben doesn’t understand German, but he knew something was wrong.  2 of the transplant teams had worked through the night on a complicated case, a new team could not be assembled,  so they cancelled Jasper’s kidney transplant for that day. This resulted in another 4 day delay.

Conclusion
Ben and Jasper remain great friends and collaborators to this day.   As Jasper put it, Ben and his wife in their steadfast desire to get him transplanted were, “extraordinary!” “Short of laying down your life for somebody, it is the most extraordinary thing you can do in your lifetime!”  We agree, this was the greatest Kidney Story Ever!